The Secret of the 4 States of Matter

States of matter can be defined as mainly the three states solid, liquid and gas.

It can be described by this example. When we take a piece of ice and apply heat, it melts into water and if more heat is applied to it, it becomes steam. Here ice is solid, water is liquid and steam is gaseous. 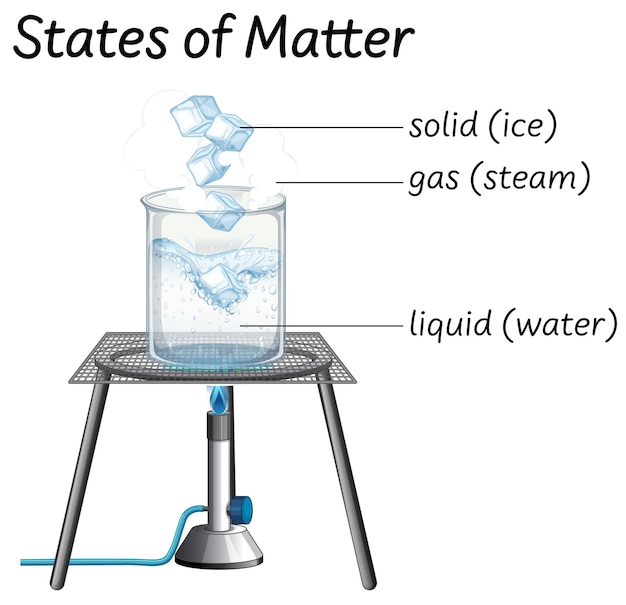 There are other states named Plasma states of matter. Plasma is one of the four fundamental states of matter, consists of a gas of ions – atoms or molecules which have one or more orbital electrons stripped (or, rarely, an extra electron attached), and free electrons. Plasma can be artificially generated by heating a neutral gas or subjecting it to a strong electromagnetic field.

Explanation of the 4 States of Matter

In solid constituents particles are closely packed together. The intermolecular force between the particles is very high and they can’t move freely but only can vibrate. For this reason,  a solid has a stable, definite shape, and a definite volume. Solids can only change their shape by an outside force, as when broken or cut.

👉 The intermolecular force between the particles is very high.

👉 A solid has a stable, definite shape and a definite volume.

👉 Solids can only change shape under force, as when broken or cut.

👉 A solid can also change directly into a gas through a process called sublimation.

A liquid is a fluid that conforms to the shape of its container.  It retains a constant volume independent of pressure. The volume is definite if the temperature and pressure are constant. When a solid is heated above its melting point, it becomes liquid, given that the pressure is higher than the triple point of the substance.

👉 Intermolecular force is relatively lower than solid states and molecules have enough energy to move relative to each other and the structure is mobile.

👉 The shape of a liquid is not definite but is determined by its container.

👉 The volume is usually greater than that of the corresponding solid, the best known exception being water, H2O.

Gas, one of the three fundamental states of matter, with distinctly different properties from the liquid and solid states. A pure gas may be made up of individual atoms (e.g. a noble gas like neon), elemental molecules made from one type of atom (e.g. oxygen), or compound molecules made from a variety of atoms (e.g. carbon dioxide).

👉 The gaseous state of matter occurs between the liquid and plasma states. The latter of which provides the upper temperature boundary for gases.

👉 Intermolecular force is very low due to the low density of the molecules are present in the gaseous state.

👉 Gas is a state of matter that has no fixed shape and no fixed volume.

👉 Gases have lower density than other states of matter, such as solids and liquids.

Plasma is usually called “the fourth state of matter,” along with solid, liquid and gas. It  is superheated matter – so hot that the electrons are ripped away from the atoms forming an ionized gas. It comprises over 99% of the visible universe.

The Sun’s corona, some types of flame, and stars are all examples of illuminated matter in the plasma state.

Gases can become plasmas in several ways, but all include pumping the gas with energy. A spark in a gas will create a plasma. A hot gas passing through a big spark will turn the gas stream into a plasma that can be useful. Plasma torches like that are used in industry to cut metals.

The biggest chunk of plasma you will see is the sun. The sun’s enormous heat rips electrons off the hydrogen and helium molecules that make up the sun. Essentially, the sun, like most stars, is a great big ball of plasma.

👉 Plasma is the fourth state of matter.

👉 A plasma is an ionized gas, a gas into which sufficient energy is provided to free electrons from atoms or molecules and to allow both species, ions and electrons, to coexist.

👉 A plasma is a gas that has been energized to the point that some of the electrons break free from, but travel with, their nucleus.

👉 Plasma does not have definite shape or volume.

👉 A gas is usually converted to a plasma in one of two ways, e.g., either from a huge voltage difference between two points, or by exposing it to extremely high temperatures.

👉 It is quite commonly generated by either lightning, electric sparks, fluorescent lights, neon lights or in plasma televisions.

Phase transitions between the 4 States of Matter

A condition of States is additionally portrayed by stage advances. Stage progress shows an adjustment of construction and can be perceived by a sudden change in properties. A particular condition of issue can be characterized as any arrangement of states recognized from some other arrangement of states by a stage change. Water can be said to have a few unmistakable strong states.

Phase transitions between the 4 States of Matter

The presence of superconductivity is related to a stage change, so there are superconductive states. Moreover, ferromagnetic states are outlined by stage advances and have unmistakable properties.

At the point when the difference in the state happens in stages, the transitional advances are called meson phases. Such stages have been abused by the presentation of fluid precious stone technology.

The state or period of a given arrangement of issue can change contingent upon pressing factor and temperature conditions, progressing to different stages as these conditions change to support their reality; for instance, strong advances to fluid with an expansion in temperature. Close to supreme zero, a substance exists as a strong.

As warmth is added to this substance it’s anything but a fluid at its liquefying point, bubbles into a gas at its limit, and whenever warmed sufficiently high would enter a plasma state in which the electrons are empowered to such an extent that they leave their parent particles.

6 thought on “The Secret of the 4 States of Matter”